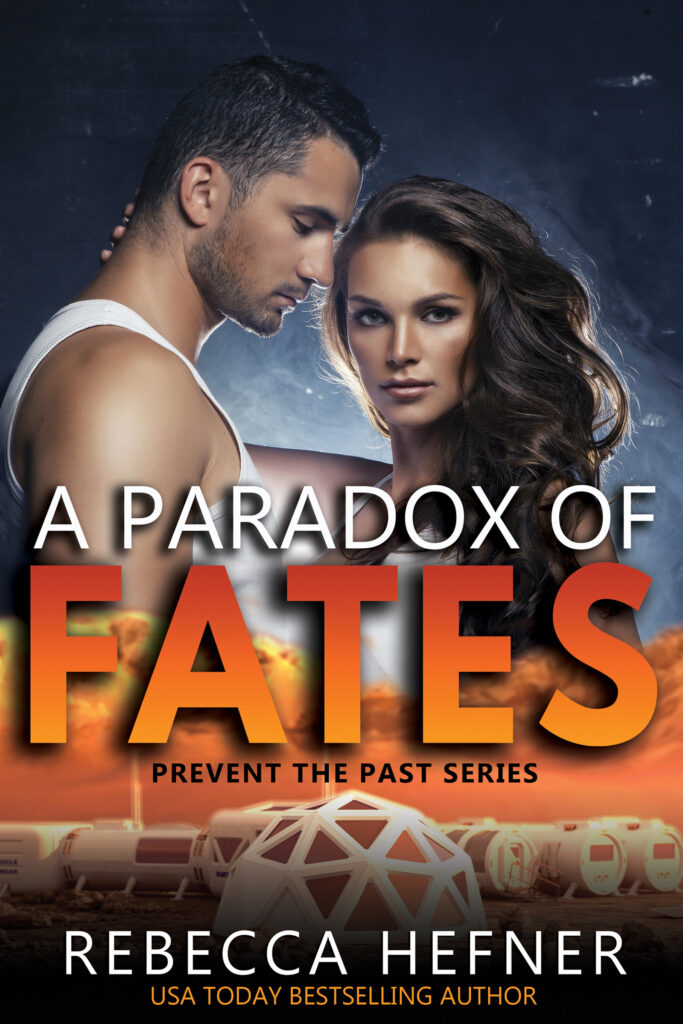 A Paradox of Fates

Prevent the Past, Book 1

One woman bred to save the world…

Dr. Elaine “Lainey” Randolph was born with one sole purpose: to prevent the past. With her brilliant mind and unwavering spirit, she works tirelessly to solve the equations that will finally unlock the mystery of time travel. Then, she will leave the post-apocalyptic future her grandfather created and travel back in time to prevent his calamitous actions.

When handsome military captain Hunter Rhodes appears at Lainey’s remote scientific hub, he offers her protection. But there are strings attached to the mysterious soldier’s proffer, and Lainey finds herself wary of the man who stokes unwelcome longing and desire in her unemotional heart. For Lainey is a scientist, obdurate and dispassionate toward the notion of romantic love.

As Lainey’s band of ragtag scientists and loyal soldiers endeavor to escape the dystopian future, the evil New Establishment threatens to destroy them all. In their unpredictable timeline, the nefarious regime has become all-powerful and will stop at nothing to ensure complete world domination…

EXCERPT FROM A PARADOX OF FATES:

“Can I touch you? By your temples?” Lainey’s eyes snapped open, although she couldn’t see him since she was staring into the darkness before her.

“Honestly, I’d let Lucifer himself touch me right now if he could ward off this monster. Go ahead.”

Firm arms slid tentatively over the back of the chair, coming to rest on each side of her neck. The warm pads of his fingers pressed against the soft skin of her temples. Closing her eyes, Lainey sunk into the ministrations as his fingers began to swirl small circles, the pressure steady but gentle.

“Oh, my god…” she breathed, her body relaxing in the chair, lithe as a cat on a sunny windowsill. Each pulse in her brain was soothed by his strong, agile fingers. “You’re a saint. Don’t ever stop. I’ll give you all the riches in the world.”

His throaty chuckle encircled her like a fluffy blanket. “I know how badly these things hurt. Kara used to wail in pain when one took over. When I would massage her like this, it seemed to help.”

“It’s heaven,” Lainey sighed, not even caring she sounded like a doe-eyed weakling. There she sat, while he stood, feeling true relief from a migraine for perhaps the first time in her life.

Eventually, his fingers shifted south as he tried to move the ministrations to the base of her head and neck, although his standing position stilted his reach.

“This will probably sound all sorts of wrong, but it’s easier if you sit in my lap. That way, I can reach your neck better. Those muscles hold a lot of the tension during migraines.”

“Whoa,” he said, sliding his fingers back to her temples. “Don’t tense up. If that’s too uncomfortable, I understand. Just trying to help.”

Lainey sat up, turning to stare into his eyes, the silver surrounding the pupils almost the same color as the moon. “I don’t think that’s a good idea.”

He held up both hands, palms facing out. “No worries. I swear, there wasn’t one ounce of anything sexual around that suggestion. I’m not really a subtle man, Lainey. If I wanted to say something sexual to you, I would. Kara used to sit in my lap while I did this, that’s all. I’m sorry.”

Lainey exhaled a ragged breath, barely able to focus on his words due to the hammering between her temples. Damn, but he looked so sincere, and his ministrations had actually been helping…

“Okay,” she said, standing and gesturing to the chair. “Plop down. But if this gets weird in any way, I’m out.”

The curve of his lips was incredibly sexy in the dim light of the moonlit clouds. As he maneuvered his muscled body into the chair, Lainey realized her mistake. She’d never be able to sit atop his broad body and control her ragged heartbeat. He was too masculine. Too raw. The thought of losing herself to the ridiculous chemicals that always accompanied sexual attraction was terrifying. She’d done that once before, and the consequences had been calamitous.

“Hey,” he said, stretching his hand toward her, “it’s okay. Come on. If you feel uncomfortable at all, just tell me. There’s no way I’m going to piss off the lady who feeds and clothes my men.” He shook his hand at her. “Come on, Lainey.”

Heart already pounding in her chest, she slipped her hand in his and let him guide her onto his lap. As she shimmied the globes of her jean-clad butt over his fly, she thought she heard him expel a soft hiss by her ear. Trying her best to relax, she aligned her spine with his front, the back of her head resting on his shoulder.

“That’s good,” he said, placing his fingers against her temple and resuming the measured strokes. “Let the tension go. You’re safe. You can turn that busy brain off for a few minutes.”